Next of Dong Nai to the north, Ba Ria - Vung Tau is a province in southern seashore with terrain of mounts, hills, tiny delta and especially is dunes. Being typical for tropical windy climate the province is potential of sunshine to prettify the long coast of 100 km of which 72 km is sandy beaches. The continental bench of province is closed to Truong Sa islands and contains big reserve of two important resources, seafood and fossil oil. Access into the land there is many reservoirs like Kim Long, Da Den, Da Ban... and rivers such as Ray, Ba Dap and Duong and also there is a hot mineral spring that temperate at 800C. Seens as one of major tourist site in Vietnam, BR - VT is a harmony of natural communities and man-made architectures. Without the appearance of winter here is the ideal resort for showering on the beach all around the year. 4 main facts to count for tourist attractions are Vung Tau city, Con Dao tropical primitive forest, Long Hai beach and Minh Dam mountain and last is primeval forest and hot stream in Binh Chau. Interposing by the cultures from three main lands, northern, southern and central of Vietnam it is exciting to note that cultural features are all here. Folksong in various melodies in Vietnam can be found and willing to perform in Theatre or at Palace hotel. Traditional provision of music instruments is also visible during the running of festivals.

Isolated from the mainland, the Con Dao islands are one of Vietnam's star attractions. Long the preserve of political prisoners and undesirables, they now turn heads thanks to their striking natural beauty. Con Son, the largest of this chain of 15 islands and islets, is ringed with lovely beaches, coral reefs and scenic bays, and remains partially covered in tropical forests. 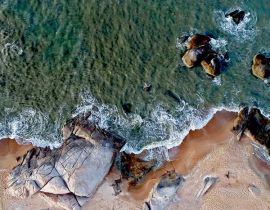