The Opera House in downtown Ha Noi is now open to the public for historical and architectural tours and art shows. 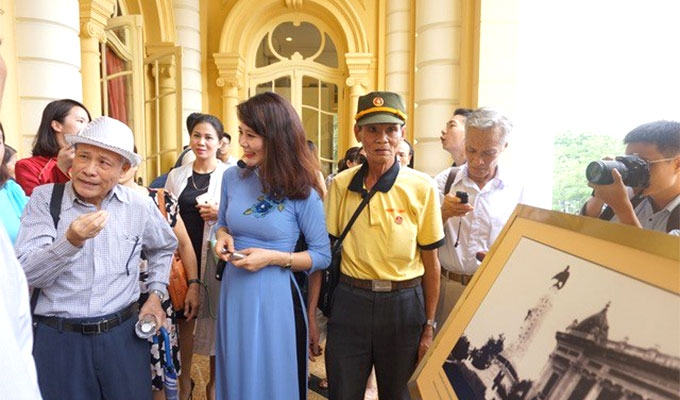 The first tour was organised on September 6. It attracted dozens of Hanoians, especially elders, and members of the media.

Visitors will be able to take in a full tour of the House. Notable sites include its main hall, staircases, stage hall, and the mirror room, with traces of bullets shot in December 1946 during the first fight in the Indochinese Campaign between the Viet Minh troops and French troops. Guides will tell visitors about important events held at the square in front of the House since early 20th century.

Besides, visitors can experience the VIP seats at the theatre hall, as well as tour the third floor of the House to see building and decorating materials for the House in early 20th century. An exhibition hall will help visitors understand the renovation that took place in 1995, and also offer photos of the House throughout the time.

The Opera House was built in 1901 and completed in 1911 by the French following the design of the Opera Garnier in Paris. It has been assessed as one of the most beautiful buildings in Southeast Asia. The House is now the most opulent building in Hanoi, and houses major events, meetings, and high-class performances by domestic and world.

“Since the House introduced the tour, various travel agencies have been interested in participating,” said Vuong Duy Bien, Deputy Minister of Culture, Sports and Tourism, “With the trademark of the Opera House that no other relic possesses, the managing agencies will develop it to make it more alluring to tourists.

“Hence, besides the venue, the managing agencies should focus on service and building interesting art shows to serve guests. In the near future, the House should introduce some other traditional shows to meet diverse demands.”

On the first open day, many elders joined the tour, including Nguyen Minh Vu, from Thanh Xuan district, who knew about the opening from public media.

“My dad used to take me here to watch cai luong (renovated opera) shows,” he recalled, “When I got older, I understood more about its architecture and historical value. I have been longing for such a tour.”

He suggested the House managers divide the tour into different purposes: to look at architecture, to understand the building’s history and to enjoy art shows.

“For example,” he said, “On even days the House may offer tours for architecture and history while art shows may be spared for night time. Because it combines too many purposes in one tour, the tour price of 400,000 VND is fairly high to a majority of people.”

Hoang Trong Su was also happy to join the first tour on September 6. “Visiting the Opera House has been my lifetime wish,” he said, “I’ll soon take my grandchildren here to admire the masterpiece of the French time in Viet Nam.”

Duong Long Tan, another elder, said the price should be adjusted to suit more people’s income.

“The tour is in an experimental period and the House’s managing board will run the tours while listening to visitors’ opinions to make necessary changes,” said Nguyen Thi Minh Nguyet, director of the House.