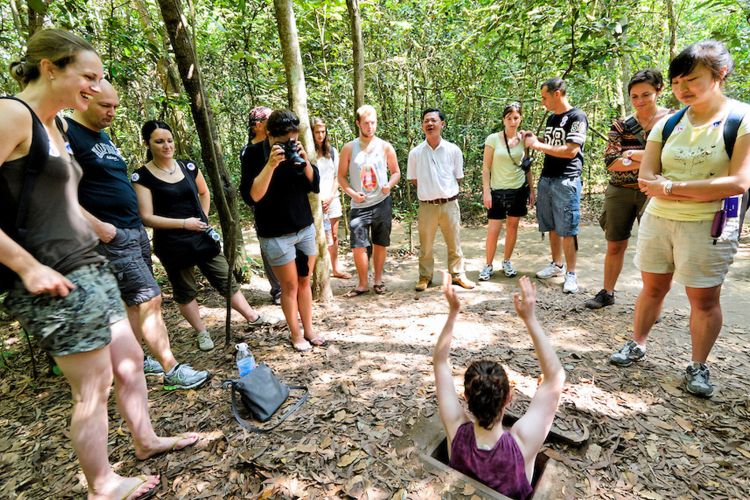 Our tour guide and driver will pick you up at your hotel and drive to the Cu Chi tunnels. We visit a local family who makes rice paper to learn more about this centuries-old Vietnamese craft. We reach the Cu Chi tunnels by mid-morning and spend some time examining this 250km-long underground maze where thousands of fighters and villagers hid and fought during the Vietnam War, referred to by locals as the "American War". The North Vietnamese Communists, or Viet Cong, built this vast network of tunnels in and around the village of Cu Chi and worked continually over 25 years to expand the multi-level network. The tunnels-which included mess halls, meeting rooms, an operating theater, a tiny cinema, small factories and vast ammunition, stores-allowed the Viet Cong to control large areas near Saigon. Today, the Cu Chi tunnels provide invaluable insight into the war era. We return to Saigon in time for lunch. Afterwards, we'll have a chance to explore Reunification Hall, the War Remnants Museum for the Vietnamese version of the "American War." Then drive to your hotel. End of services

Why book with us?

What Our Guests Say

The guides were the highlight in the trip, and this is saying something! This trip has been so well thought and perfectly adjusted to accomodate...
David, Armenia

Well done Ha Our recent visit to Vietnam was fantastic. Organised by Ha right after some shared topic we experienced a goody with his...
SueHawkins, Belgium

Hello Giang  What a nice surprise to know from you.   Here in little Denmark we're approching the authum and also the weather is...
Martin, Denmark